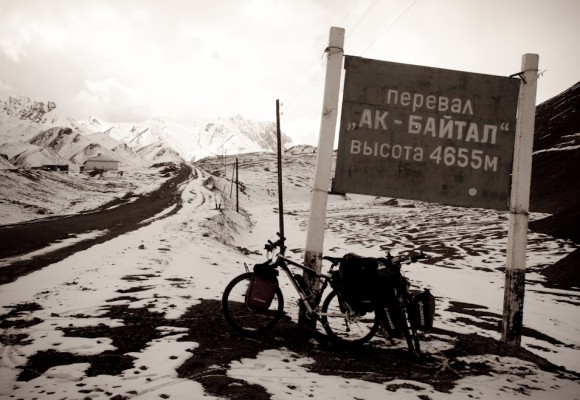 Sometimes we understand each other in mid-sentence or even before any  words. We just exchange glances, gestures, and  know what it is about. Oddly enough physical and mental fatigue causes some kind of stress that puts us on completely different wavelengths. This time it comes to sausage and  Ak-Baital Pass.The morning sneaks up on us into the tent. As I move, the frost that had settled in the middle of the tent falls on Andrew’s sleeping bag. Andrew loudly slurps tea. I’m sick of the the malfunctioning stove, which seems to be clogged. We pack and Andrew is sluggish and delays the departure. He just sulks and complains. What’s going on?

Well, we have yet to ride the highest point on our bike route to Ak-Baital Pass. It is 4655m above sea level. Like a vast ice factory, it is covered with snow and a strong wind is blowing and  the howling of wolves and the lack of oxygen will be giving a headache and in general making you feel pretty awful. This was the picture of the road as told to us by the locals. It is true that generally we discount the stories by half, but the remaining half still did not give any comfort and drilled a hole in the head.

After breakfast we pack up and move to conquer the pass, but a  quarrel breaks out.
– You put away the sausage?
– Yes, I packed it.
– Give it to me. It weighs half a kilo, it will be hard for you to ride with this sausage.
– Are you crazy! Half a kilo does not make any difference to me. Besides, I do not want to unpack the panniers, now. Let’s just go.

So we go on the bumpy road. Pedaling furiously, but silent. In the distance you can already see the first approach into the pass. Tension increases. When we reach the steep approach ahead of us:
– Give me the sausage?
– No. I will not stop to pull out that stupid sausage, since you’re going uphill.

At some point it is not possible to push the pedals. We dismount from the bicycle and I push it up the hill. Andrew, who is about 50 meters in front of me is pedaling briskly. He sees that I am not pedaling and is waiting for me. He shouts to me from afar.
– Give me that sausage! It’ll be easier going.
– Why are you walking?  I can safely push the bike. What is bothering you?
– But we do not have time to ride the damn pass against the snow!  He points to a big gray cloud.
– Do you really think that a pound less will make me the bike faster and effortlessly conquer the pass?
– Well, you’ll definitely ride faster.

Ak-Baital Pass is the highest point on our route.
On an impulse, I get on the bike and ride on, because I have to show that I can. But, after 100 meters I am so short of breath that I had to rest for a while.
– I told you to to give me the sausage! Why are you so stubborn?
– You’re stubborn and annoying with the sausage.
– It’s a go with the sausage and the torment! If you gave it to me in the morning, we would be done a while ago.
– Sure. I do not have strength, I am carrying a pound of sausage … I growl under my breath.

And so slowly we roll forward. The dispute over the sausage is growing and it seems that the moment has reached its apex. I already have removed that silly sausage from the panniers and am about to bash it in Andrew’s head, but just then it appears before us. The Pass.
The tension dissolves. It just drains from us in one moment. We get some new energy and the last few meters are overcome very quickly.  We do a quick series of photos and move on the road, because the snow begins to fall seriously.

Coming down we laugh at our stupid dispute. The sausage, which had become a bone of contention, completely took our minds. At least we did not think about the cold, powdery snow, blowing wind, lack of oxygen, wolves and not hurt our heads. Sometimes such arguments are evidently needed.

LosWiaheros
Alicia Rapsiewicz and Andrew Budnik – are a Polish couple who started in July 2009 on a West to East round the world tour. After one year and reaching Australia, they decided not to continue and turned back West. They found a yacht and sailed for 4 months in the Indonesian islands and then started cycling. They reached Poland in October (2013) from Bangkok via Hong Kong, Japan, Afghani nad Tadjik Pamir. Their blog is at www.LosWiaheros.pl.
Copyright (c) Crosso 2019. Realizacja strony Andrzej Budnik.